Book Review: An Ember in the Ashes by Sabaa Tahir *5 STARS!* 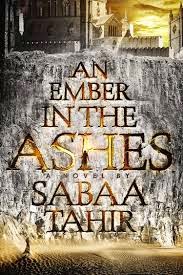 What would you do in a world where resistance was met with death?

Sabaa Tahir’s captivating debut novel, An Ember in the Ashes, takes on this question.  Life is not easy in the Martial Empire.  Resistance is met with swift retribution and the Martial’s rule with an iron grip.  This is the world Laia finds herself in.  After the Empire captures her brother she is willing to go to extreme lengths to try to save him.  But is it too late?

Elias is a super soldier.  His bloodline is second to none and he is at the top of his class at Blackcliff Military Academy.   The only issue is he HATES his job and wants to desert.  The day before he deserts he is given news that turns his world upside down.  Will he be able to escape or he will he find himself more involved in the Empire than he could even imagine?

Wow!  The pages of this book fill you with excitement, tension and an undeniable urge to keep reading.   I feel hook, line and sinker into the world Tahir created.   She has crafted strong primary and secondary characters and a new world that you want to learn more about (from a distance!).  I especially liked the relationships the characters built and what we learned about them in the process.  My words are not doing this justice but you will want to BUY BUY BUY this book!

I have already bought a copy for my classroom library and the first person to check it out was my boss.  This is a book that readers of all ages can get into.  This is one of the best books I have read this year and recommend it to anyone looking to experience the thrill that comes with reading a captivating and exciting book!

Note: I received this book for free in exchange for an honest review.
Posted by Unknown at 11:20 AM

The Diary of a Young Girl
by Anne Frank

Into the Wild
by Jon Krakauer